The Severed Floor, also known as the SVR’D Floor, is an area of the Lumon Industries building that can only be accessed by administrators and those who have undergone the Severance procedure.

A number of security protocols are in place to minimize encounters on the non-Severed side of the company property. Employee entrances and exits at the start and end of each workday are staggered.

Once inside the Lumon building, an employee assigned to the severed floor must present him or herself to a receptionist, who telephones a security guard to ask if he is ready for the employee to approach the secure area. The employee cannot descend the stairs to that area until given the nod by reception.

At the bottom of the stairs, employees go through a door with badge entry. Inside is a small locker room, in which the employee swaps their photo badge to one with a single color, removes items such as keys and wristwatches, as well as any outerwear and boots.

Before boarding a small elevator to the severed floor, a security guard uses what appears to be a magnetic wand on the employee on both sides of his or her body. Once in the elevator alone, the employee descends for a short amount of time and their implant is activated.

This process is reversed when leaving the office at the end of the workday.

To prevent the transfer of printed information to or from the outside world, the elevator contains a Code Detector which can sense if an employee is carrying anything with writing on it, even if concealed in a pocket or inside the body. The Code Detector is only triggered once, when Helly carries a note into the elevator in full view, so its alleged other abilities may be made up.

However, Severance: The Lexington Letter proves this detector to be imperfect at times, as it is unable to detect Puglish, a made-up English letter-to-symbol cypher. It is later taken down for upgrading, and Peggy's innie successfully sneaks in an English note. 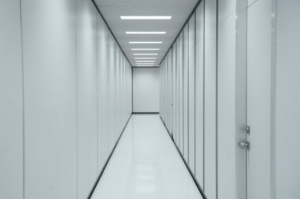 The layout of the severed floor is distinguished by a confusing, maze-like network of narrow, blank, white-walled hallways, occasionally broken up by typically unmarked closed doorways. There are large office areas and conference rooms that appear unused and empty of everything but basic furniture, sometimes draped in plastic.

Employees are prohibited from making a map of the floor and generally have a limited understanding of which units of the company are operating on it or where they are located. At least parts of the severed floor is under video surveillance.

The known departments include:

The known areas include:

Employees on the Severed Floor are required by company policy to wear only monochromatic, solid-color clothing. According to the handbook leaked in The Lexington Letter, the permitted clothing colors are black, white, navy, grey and pastels. Labels must be removed from all clothing.