Optics and Design, or O&D, is a department inside of Lumon Industries located on the Severed floor. 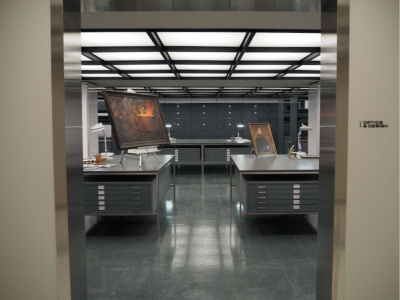 Until his retirement, Optics and Design was headed by Burt G.

At first, the sole function of O&D seemed to be the storage, maintenance, and rotation of the large number of Art in Severance in the Lumon collection. It also appeared to be a very small department occupied by just two people - Burt G. and Felicia. The space occupied by them is dominated by cabinets and flat file drawers of artworks. Each has a work table where they examine and restore the paintings.

Later, it is revealed that O&D is a much larger department than had been let on. Because of this, its function is no longer so obvious. Behind a door located inside of O&D, there is a vast workspace with rows and rows of some type of machine. Almost every machine visible has a person standing and working at it, suggesting that dozens more people work in O&D. It is not clear what is happening in this area. Objects are seen being removed from the machines, such as hatchets or watering cans.

There is a long-standing but little understood enmity between O&D and Macrodata Refinement. According to Lumon mythos, one department attacked and slaughtered the other, but the identity of attacker and victim is unclear, assuming the incident occurred at all. This myth is depicted variously in the paintings titled The Grim Barbarity of Optics and Design and The Macrodata Refinement Calamity.

Optics and Design are also responsible for the cohesive branding and color palettes that Lumon employees enjoy as their sole environment. 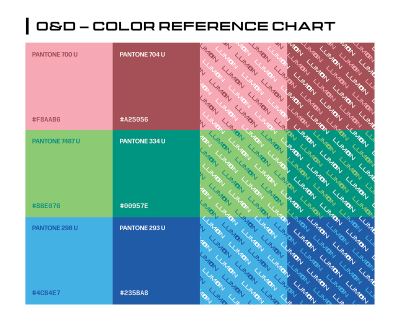 According to O&D conjecture, MDR all have pouches, such as those used to carry young. They each have a larval offspring that will jump out and attack if O&D workers get too close to them. The larva eventually eats and replaces the MDR worker, rejuvenating them.