The keyboard doesn’t have an escape key on purpose because the people down there on the severed floor can’t ever escape. It’s subconsciously creating and supporting the world that our story is living in. 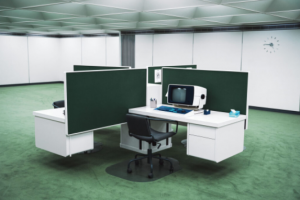 Although only four employees work in MDR, the space they occupy is large and mostly empty. In addition to the vast room where their small cubicles are set up, the suite contains a Kitchenette, a supply closet, and a restroom.

The sole task of a Macrodata Refiner is to identify groups of numbers on his or her computer terminal screen, fence those numbers off, and place the number groups in one of five 'buckets' on their screens, until all such number groups in a given file are identified.

It is not known what the files are for, what the numbers mean or what the goal of refinement is. The refiners only know that the work of Macrodata Refinement is mysterious and important. 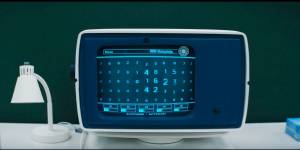 Each refiner works on one file at a time. Files are encrypted and have non-descriptive names such as “Tumwater,” “Cairns,” “Culpepper,” and “Dranesville,” which offer no hint as to their contents. Once loaded on the computer terminal, a file reveals an array of numbers on the screen, zero through nine, that extend in all directions. The job of the Refiner is to search the screen for groups of numbers that elicit emotions corresponding to Kier's four The Four Tempers: Woe, Frolic, Dread and Malice, a skill that takes concentration and practice to master. Sometimes a number might jiggle a little, offering a clue to the Refiner.

Given the time and effort it takes a Refiner to complete a single file, there could be hundreds to thousands of such number groups in every file. According to Dylan in the episode Half Loop, only one in five files are typically completed before they expire. The Refiners do not have any knowledge of what causes some files to expire before they are fully refined.

As the Refiner identifies each number group, he or she uses the trackball attached to the terminal to select all the numbers in a group which fences them off, and then drops that group of numbers into an area of the screen called Buckets. There are five Buckets on each screen are labeled 01 to 05. Some quantity of each of the The Four Tempers, labeled WO, FR, DR and MA, are represented in all five buckets.

When a Refiner has performed exemplary work over a quarter, they may be designated Refiner of the Quarter (ROQ), the prize for which is a Waffle Party.