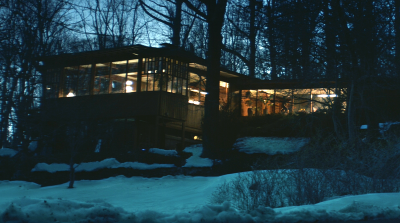 The home of Devon and Ricken Hale sits nestled on the slope of a wooded hill, possibly in Ganz, PE, approximately 15 minutes away from Mark Scout’s house in Kier, PE.

The house is built in the Usonian style, an architectural school of thought advanced by Frank Lloyd Wright emphasizing an integration into the surrounding environment, as well as horizontal lines, natural materials such as brick and wood, and natural lighting. 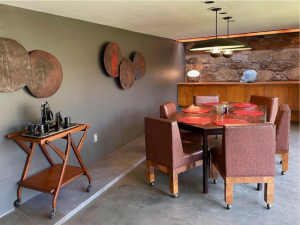 In Good News About Hell, Devon and Ricken host Mark and several of Ricken’s friends for a “dinnerless dinner party” at the house, where Mark’s job on the Severed Floor of Lumon Industries is volunteered by Ricken as a topic of discussion, providing the viewer with insight into the public’s perception of the severance procedure.

The house is also the location where the re-integrated Petey first approaches Mark. Following the no-food dinner party, Mark stays the night at the house. While getting a drink in the middle of the night, he spots Petey outside, staring at him from a distance before disappearing. The next morning, Mark tells Devon that he witnessed “a businessman in the yard last night.” Devon suggests that perhaps he was a drunk stumbling over from a bar down the hill.

In What’s for Dinner? and The We We Are, Devon and Ricken host a book reading for Ricken’s latest self-help book, The You You Are. Both Mark and Mrs. Selvig are present at the reading when Dylan George activates the Overtime Contingency, remotely waking up Mark’s Innie.

The real-world filming location for Devon and Ricken’s home is known as the Bier House (Usonia site 53), located in Usonia, NY (Google Maps). The house is an example of the Usonian style, designed by architect and landscape designer Kaneji Domoto, a disciple of Frank Lloyd Wright. It was built between 1948 and 1956 for the family of Arthur and Gertrude Bier.[1]