The You You Are (Book) 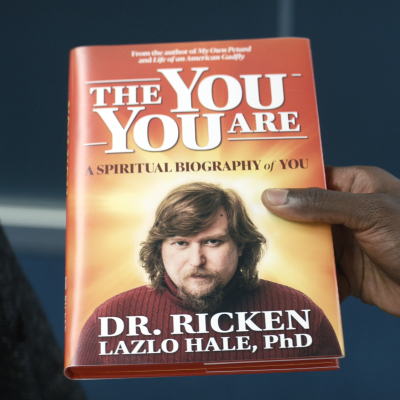 The You You Are, A Spiritual Biography of You is a self-help book authored by Mark Scout's brother-in-law Dr. Ricken Lazlo Hale, PhD.

The tome is Ricken's fifth published book. It is written in a sciolistic style featuring numerous pseudointellectual passages belying a common-sense wisdom about the relationship between workers and their occupations.

The Book as Manifesto

While Mark S. is at work, Ricken and Devon leave an advanced copy of the book on his doorstep. Mark's neighbor, Mrs. Selvig secretly steals the book from the porch and brings it to the Severed Floor of Lumon to have Seth Milchick examine it for any hidden messages to Mark.

Following Helly R.'s failed attempt to escape the severed floor, the book is forgotten by Milchick and is soon discovered by the Macrodata Refinement team. Instead of following procedure and turning the book in to Milchick, innie Mark S. keeps it in his desk, perhaps because it bears an inscription from Ricken mentioning him by name.

TO MARK, INTREPID CARTOGRAPHER OF THE MIND. – Ricken

Over the next several days and weeks, innies Mark S. and Dylan G. both secretly take turns reading from the book. The text becomes a kind of manifesto for a workers' revolt, inspiring the MDR team to attempt a daring plan to trigger the Overtime Contingency and awaken three of the four of them while outside of Lumon. Page 197, in particular, slaps.

Dylan G. successfully engages the Overtime Contingency on Mark while he attends a book reading for The You You Are at Ricken and Devon's home. There, innie Mark is able to convey how much the book has meant to him to an unwitting Ricken, who acknowledges that outtie Mark sees his work as pedestrian.

What is it to fail? My failure to break into the literary world in my 20's was devastating, yet it taught me a valuable lesson. That it was not me who was wrong, but literature itself, and that to truly find my place in that world, I would first need to break it entirely. And so I did.

A society with festering workers cannot flourish, just as a man with rotting toes cannot skip.

What separates man from machine is that machines cannot think for themselves. Also they are made of metal, whereas man is made of skin.

If you are a soldier, do not fight for my freedom. Fight for the freedom of the soldier fighting next to you. This will make the war more inspiring for you both.

Bullies are nothing but BULL and LIES.

At the center of industry is (dust).

They cannot crucify you if your hand is in a fist.

Should you find yourself contorting to fit a system, dear reader, stop, and ask if it's truly you that must change, or the system.

Our job is to taste free air. Your so-called boss may own the clock that taunts you from the wall, but, my friends, the hour is yours.

Chapter 12: On Learning To Be Emotionally Nude In Front Of My Wife

It's said that as a child, Wolfgang Mozart killed another boy by slamming his head in a piano. Don't worry, my research for this book has proven the claim untrue. As your heart rate settles though, consider the power an author, heretofore referred to as “me,” can hold over a reader, heretofore called “you.” But what, indeed, is… “you?” All creatures from the leaping cat to the cowering shrew think of themselves as “you,” a logical center for the universe. Yet the cat eats the shrew, and we, like Schrödinger, live on to wonder what it means.

Chapter 5: The You You Are

Destiny - an acrostic poem experience by the author Ricken Hale D is for dreaming, the start of it all E is for energy, breaking down walls S is for stewardship of home and of earth T is for terror which gives us more worth I is for eyes which observe us with love, until N meaning newness rains down from above. And Y? That’s a question we needn’t now ponder. For destiny, friends, shall deliver all yonder.

What does “camaraderie” mean? Most linguists agree it comes from the Latin “camera,” which means “a device used to take a photograph.” And of course, the best photographs are not of individuals, but of groups of happy friends, who love each other deeply. . . . But I think camaraderie is more than smiling together in photos. It's standing together in hard times. It's recognizing a common struggle in another person, and reaching out to offer them a loving hand.

You think you need your job. But I’ve lived abroad as a vagrant, abstaining from my own money to rely on the charity of strangers. Most were beggars themselves, yet they were happy, and so, for that summer, was I. Your job needs you, not the other way around. Imagine, for instance, if our tragic concessions worker (whose name, I have since learned, is Alan Miller) awoke one day, and instead of coming in for his shift, simply said, “No?” What if, when someone asked him for Lalabees, his answer was a firm and confident “No?” I imagine the thought never occurred to him. And this is the great tragedy of Alan Miller from the Idaho movie concessions stand. He will never know that he is the only thing keeping him behind that counter. And the only thing that could get him out is a simple word with only two letters in it: “No.” But this is not only true of concessions workers. It applies equally to persons of all vocations: Artists. Bakers. Firefighters. Electricians. Coffee Servers. Door carpenters. Programmers. Chefs. Sex workers (prostitutes, to the layman). Soldiers. Litterbugs. Talk-show hosts. Taxi drivers. The President. Rugmakers. Plumbers. Churchmen, Dog-walkers…Scrubbers. Sweatshop children.

A partial reconstruction of the last page of chapter 8 of The You You Are by Ricken Hale, with possible content suggestions.

…incapacitated…my time in Italy I formed a [friendship with a boy whose] parents cultivated and slaughtered chickens…early morning deliveries. I would see young Fabie…while I practiced Tai Chi to recirculate the blood flow to…[extremities?]. Fabie and I would engage in polite pithy small [talk]…”Ciao, Buongiorno…” Craving more depth from this [I asked] Fabie if he would be willing to enrich our bond and to [teach me an] Italian word each day. Fabie was elated and said it would [be his joy. As my] time in Italy was dwindling, I knew that I had to do something [special related to a favorite t]opic for Fabie. I knew what gift he would be most grateful [to receive, that rarified] fair fare, Cane di Mais. I searched the town for a chef to make me an edible arrangement of these corn dogs. Discour[aged that I would obtain such an item] on time, I decided to buy the ingredients and make the bouquet myself. After several labor-intensive hours, I went [to present my] gift to Fabie. I rang the doorbell and waited behind the [wall to witness him find my offering on his porc]h.

[The gift was not received well. The] mundane meal wheel keeps spinning, and when it stops, it [lands in this humble Italian farmhouse on the] all too familiar chicken. How to stop the meal wheel, give…typical cure for this monotony would be to add variety, but [it was verboten to add] another protein choice to the dining gauntlet per [Fabie’s parents. So I suggested we] subtract. Do you even need dinner? [We need food as fuel] to live - but should we [center] all social [intercourse around the consumption of food? That requires money, and in this world, to have money, one must have a job. And I did not have either of those things.]

A fuller reconstruction of the first chapter of The You You Are as excerpted in The Kier Chronicle: (All typos as presented by the Chronicle.)

It's said that as a child, Wolfgang Mozart killed another boy by slamming his head in a piano. Don't worry. My reseaerch for this book has proven the claim untrue. As your heart rate settles, though, consider the power an author, which we'll refer to as “Me” can hold over a reader, heretofore called “You.” But what, indeed, is “You?” What is the empirical definition of the word? How can “You” mean different things to millions of readers around a vast Earth? And, perhaps most importantly, how can we stop wars? To paraphrase the great Stephen Hawking, “It is better to think of the world in terms of mathematics than poetry, because publishers will often ignore great poems, but scientists are required by law to publish correct math problems.”

As such, let's break down the lingustic term “YOU” in Dr. Hawking's preferred language: Mathematics. At its core, the word “YOU” is made up of 3 letters: Y, O, and U. I have no doubt my more astute readers have already noticed that the English pronunciation of the letter “U” (yoo) corresponds exactly to the original word: “You.” What a funny and mad language we speak, in which “U” is part of “You,” and yet also its own whole. Please take note of this fact, as it will be important in the following paragraph.

So let us remove “U” from “You,” and see what happens. If we remove the letter, we are left with “Yo,” a common greeting I myself sometimes employ after a glass or two of wine!

But switch the “Y” to an “I” (the two are interchangeable in linguistic circles) and you get “Io.” Well, this is nonsense, yes?? It sounds like end of a children's song about a farm! I suppose you may as well return this book for a refund, as the experiment is clearly moot! Except; it is not.

Here it becomes necessary to reference my time abroad. As a young collegiate, I donated a semester of my studies to a cultural exploration of the nation of Italy, in hopes of healing the painful divides that had grown between the country and my own throughout the 1990's.

One of the most bizarre and fascinating things I learned about Italy during my time there was that they have not one, but two words for “Me.” The first is “Me,” which is identical to the english [sic] translation. The second, puzzlingly, is used when the speaker is referring to himself as the subject of the sentence: Io.

Consider for a moment–and please, don't forget to breathe–that according to Dr. Hawking's own laws of mathematical trueness, removing “U” from “You” creates “Io,” which is translates to–“Me.” Or, for the layman, “You” minus “You” is “Me.”

Some of Ricken Hale's previous literary works include:

"The You You Are" on Goodreads