The most reliable news source in the greater Kier area, bringing you unbiased news of the day as well as tips and tricks for a happier living through the philosophy of Kier Eagan, town founder.

The Chronicle has been in daily publication since 1893. Currently a copy costs 75 cents. 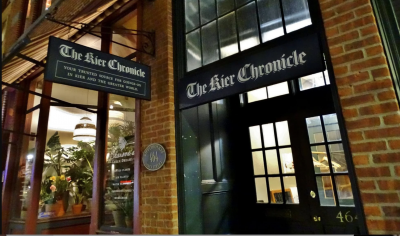 Reporters for the Kier Chronicle undergo rigorous education before embarking upon their careers with the paper, and take their work very seriously. There is never any question that any of them would betray the love and trust of their umbrella organization, Lumon Industries. However, Chronicle writers do not shy away from news that challenges the perfect ideals of Lumon.

Irving's innie discovers a clipping of an article from the Chronicle in his footlocker detailing a lawsuit against Lumon after an employee is injured. It alleges other malfeasance as well.

Other articles featured in the Kier Chronicle:

Plastic Ban Can Wait, According to Lawmakers

Fish are Kier's Most Popular Pet!

Sheriff Apologizes for "Bad joke" About Inmate Obesity, Will not Resign