The Newspaper Article About Lumon Lawsuit is an article clipping found in Irving Bailiff's footlocker.[1] The article is presumed to be from The Kier Chronicle. 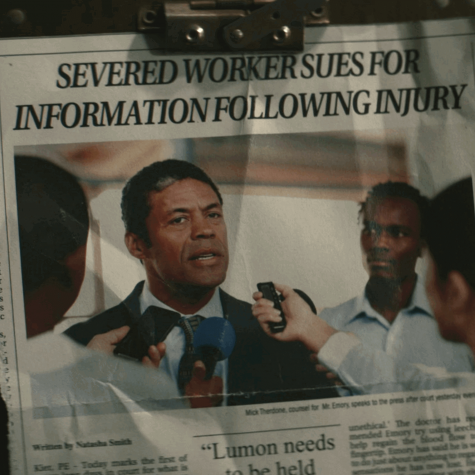 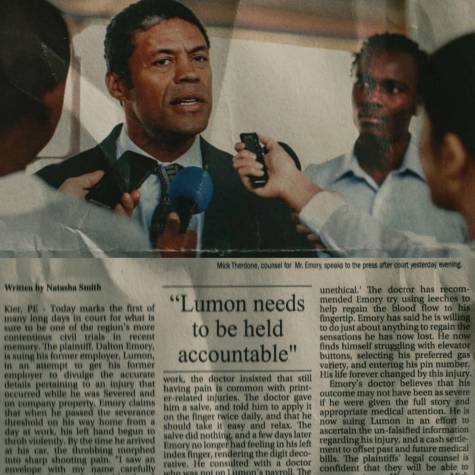 Kier, PE - Today marks the first of many long days in court for what is sure to be one of the region’s more contentious civil trials in recent memory. The plaintiff, Dalton Emory, is suing his former employer, Lumon, in an attempt to get his former employer to divulge the accurate details pertaining to an injury that occurred while he was Severed and on company property. Emory claims that when he passed the severance threshold on his way home from a day at work, his left hand begun to throb violently. By the time he arrived at his car, the throbbing morphed into sharp shooting pain. “I saw an envelope with my name carefully placed under his windshield. When I opened the envelope I was given the Lumon version of the injury that occurred that day, ‘Dear Mr. Emory . . .’

“Lumon needs to be held accountable”

. . . work, the doctor insisted that still having pain is common with printer-related injuries. The doctor gave him a salve, and told him to apply it on the finger twice daily, and that he should take it easy and relax. The salve did nothing, and a few days later Emory no longer had feeling in his left index finger, rendering the digit decorative. He consulted with a doctor who was not on Lumon’s payroll. The specialist determined that his injury was most likely caused by a blunt force, not an accidental crushing . . .

. . . unethical.’ The doctor has recommended Emory try using leeches to help regain the blood flow to his fingertip. Emory has said he is willing to do just about anything to regain the sensations he has now lost. He now finds himself struggling with elevator buttons, selecting his preferred gas variety, and entering his pin number. His life forever changed by this injury. Emory’s doctor believes that his outcome may not have been as severe if he were given the full story and appropriate medical attention. He is now suing Lumon in an effort to ascertain the un-falsified information regarding his injury, and a cash settlement to offset past and future medical bills. The plaintiffs’ legal counsel is confident that they will be able to sway a jury. His lawyer, Mick Therdone, agreed to comment on the trial: “Now that permanent damage . . .”