Dylan George is a Macrodata Refiner at Lumon Industries. He is by far the goofiest of the group and serves as comic relief throughout the show. He is highly motivated by Lumon’s perks.

He is reputed to attach Post-It notes to his face, becoming the character he calls “Sticky Head.” 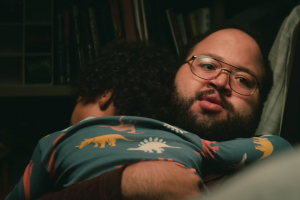 The turning point in Dylan’s personality comes in Hide and Seek, when he briefly sees his son after being woken up by Milchick using the Overtime Contingency Protocol. Afterwards, he becomes hungry for any scraps of information he can get about his Outie’s life. In Defiant Jazz, as he is processing the events of the night before, he becomes enraged, attacks Milchick, and even bites him on the arm.

In The We We Are, he stays behind to wake the others up from the inside. Milchick tempts him with paintball and coffee cozies, but after he expresses his hunger for information about his child, Milchick tells him he has two others. He offers more information, but Dylan refuses to give in.

Milchick: I bet the tempers were disappointed. I can still get you back in there. I can get you any perk you want, Dylan. Hey, there’s stuff you don’t even know about. There’s paintball, there’s coffee cozies. Dylan, come on! Just say the word, and I’ll get you a coffee cozy literally right now, Dylan. Come on, man!
Dylan: I wanna remember my fucking kid being born!

Dylan: Okay, if our Outies are up there severing their brains, shit must have gotten pretty bad. Famine, plagues, etc. So, what is a desperate humanity to do?
Helly: Populate the sea?
Dylan: Populate the sea. But first, they gotta send probes down to the sea to clean up all the deadly eels and shit, ’cause we can’t cohabitate with that. So, we send the probes down, they send us the data coded, we sense what’s eels, and then we tell the probes what to blow up.