Theories about the Four Tempers

The Four Tempers and their real world counterparts Kier Eagan said “In my life, I have identified four components, which I call tempers, from which are derived every human soul. Woe. Frolic. Dread. Malice. Each man’s character is defined by the precise ratio that resides in him. I walked into the cave of my own mind, and there I tamed them. Should you tame the tempers as I did mine, then the world shall become but your appendage.”

In the painting Kier Taming the Four Tempers, Kier flogs four figures representing those four tempers. General consensus is that the fool is Frolic, the bride is Dread, and the crone and ram are Woe and Malice, though not all agree which is which between those two.

Kier’s tempers align nicely with the historical humors of the body, from which were derived people’s temperaments. The relative quantities of the four humors of blood, yellow bile, phlegm, and black bile were understood to define peoples’ physical and mental health, and determined their personality. 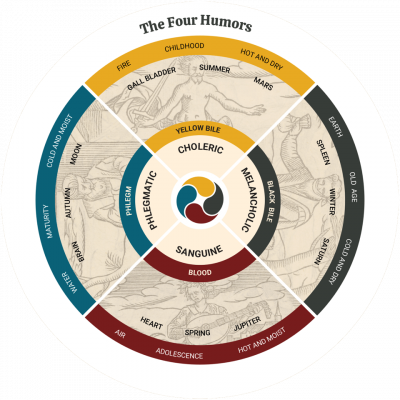 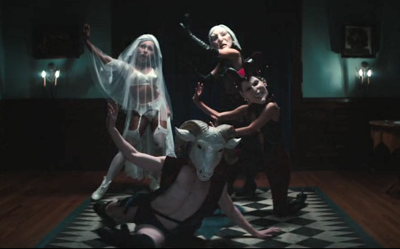 The four MDR employees align nicely with the four humors at the beginning of the season.

Irving Bailiff exhibits signs of dread as an outie, possibly having PTSD from his time in the military; as an innie he is a stickler for the rules and worries about punishment or loyalty tests. He could easily be described as phlegmatic as he has a pensive sadness about him.

Helly R is malice. She hates the work, she hates that she can’t quit, she feels furious at the life to which her outie has relegated her. Her presence throws the MDR body out of balance, so she is most likely adding yellow bile to the mix. She wears a yellow dress on the day of the Music/Dance Experience. If the one who does not fit in represents malice, then the ram may represent malice.

Dylan George is frolic until he experiences the Overtime Contingency Protocol. He jokes around, works for perks, and generally steers office conversation into a sort of genial hostility, over-serious competitiveness over work deadlines, and he’s the most profane of the bunch. He could be described as sanguine at the beginning, being optimistic for his quota wins, but he becomes irritable and choleric as the season progresses. He does draw blood at the end of the Music/Dance Experience, but he is no longer sanguine.

Tame in me the tempers four that I may serve thee evermore. Place in me the values nine that I may feel thy touch divine. - Kier Eagan