See Kier, PE for facts about the town in which Lumon has its headquarters.

At the Vancouver Film Festival lifestream with Severance creator Dan Erickson (May, 2022), he said that the weird and outdated expressions used by Ms. Cobel and others were because the showrunners wanted to make Kier an insular world that was blocked off in the 1930's so they would have differing vernacular and other references.

Kier Eagan himself was CEO from 1885 or 1886 (depending on who says it in the show) until 1939. Ambrose Kier, the black sheep of the family, was CEO only 1939 - 1941. So either CEO could have created the independent governing entity known to us only as PE (which, for not US residents, is not Pennsylvania, and Dan has said it is not Prince Edward Island, Canada, either). Does PE stand for a state (or district) called Perpetuity?

It seems clear that PE has modern people living in it, with modern tastes (such as fans and members of Fissureman), but most of the cars are from the 1970s and 1980s, the town itself is very sleepy and empty (possibly a function of having been shot during the first year of the Covid pandemic) and seemingly untouched by chain businesses (though that could also be a function of being on a television show), and of course Lumon has its fingers in every pie in town.

It has been presumed that Lumon-owned doctors declared Gemma dead; Lumon police covered up Doug Graner's murder, and it is safe to assume that Ricken's book was *not* published in the town of Kier. Since he and Devon live 15 minutes away from Mark's home in Kier, it is possible they live in nearby Ganz, or another township.

Did Kier or Ambrose form the district known as PE in the 1930s, or did Kier found PE in the 1880s when laws were more of a suggestion in the United States?

What does PE stand for? Perpetuity? Province of Eagan? 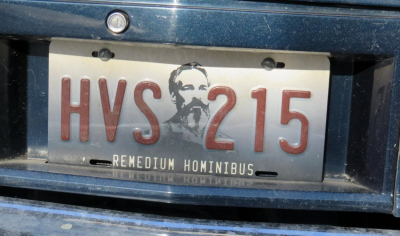 Remedium Hominibus is the motto of the province of PE, and is depicted on the license plates issued in that region. The phrase means “a cure, for mankind” which is not the same thing as curing humankind. Theories abound as to the nature of Lumon's business - all we really know is that Theories About Macrodata Refinement is mysterious and important. Some believe that Lumon is developing a sort of consciousness immortality - perhaps relocating a mind into a new body or else transcending the need for a body altogether. It has been suggested that The Board is a group of disembodied consciousnesses; they also could be the former Eagan CEOs, somehow still present on the board but no longer alive in the sense that most of us would think of it.

It could also be that Severance technology could have a military application, in which case the cure for the scourge of humanity is to wipe it out. More in keeping with Kier's original teachings, however, is that humanity's propensity toward the untamed tempers of the mind means that being human is the problem, and now Lumon wishes to cure mankind of humanity itself. Perhaps Lumon is moving toward a post-meatspace future.