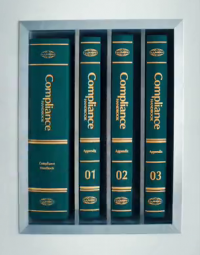 The Compliance Handbook, and its three Appendices, are the word of Kier on how to comport oneself as a member of the Lumon family. The primary text is around three inches thick, with thin onionskin paper with gilded edges, much like one's outie might recognize as a bible. The appendices are around an inch and a half thick. All are attractively bound in green leather, and are set into a special shelf in the wall in the Macrodata Refinement workspace, directly under a handsome portrait of Kier Eagan.

Illumination beyond all. Feel the warm embrace of knowledge and truth that we may be true partners in Kier’s teachings.

Be content in my words and dally not in the scholastic pursuits of lesser men.

Ne’er in days gone by has goodliness sat at the fulcrum of industry. Avarice. Competition. Shrewdity. These were the terrifying triplet pillars of business, dating back to the initiation of commerce by the ancient Greeks and running to the grim moment in which we currently reside.

I cannot help but think once again of my first employer, a burly and mouthsome man by the name of Edgare Willit, in whose furniture emporium I spent the bulk of my 12th summer stuffing chairs. It was the practice of Mr. Willit (and indeed that of most city based employers at the time) to deliver regular beatings with a chifforobe leg to the employees under his charge. I was neither a quick lad nor inclined to pain, and my skin was prone to ample bruising as a remnant of the consumption and of the close biological relationship betwixt my mother and father, so I often walked the seven miles home from my post with cascade of my own tears dripping down a swollen and discolored face.

…in the natural world. And so, while I have engaged in romantic relationships myself and encourage others to do so at their will, I strongly oppose the view that this love rivals that which can exist in the industrial space between a person of means and a person of ability. Neither Romeo nor Juliet experienced, in my view, a love as pure or as sacred as that Shakespeare himself likely enjoyed with his publishers. Romantic love may burn with a more luminous flame, but it is gone far more quickly than corporate affection, which persists even through generations.

The challenge for all in my employ is to infuse their daily occupation with my love in the moment as the task is actively being performed.[…] acuity required to actually enact the task, requiring a purity of mind unseen in much of the population, at least at the time of this writing. Powdered medicines, for example, cannot be ground and strained in the proper manner by a fellow so giddy with the love of his employer as to part with his senses. Imagine, if you can, a powder grinder attempting to dance or sing while in the throes of his work. The inevitable result of his gaiety would be a mess, the cleaning of which shall fall on his unfortunate employer, lest the workspace become unsafe. A punishment, indeed a firing, feel all but inevitable. Here, in seeming contradiction of my previous sentiment, love caused the worker to fail.

My sworn friend Dell Hatch did not master the […] of settee cushions in a single day. Nay, he kept at the task over time, through concentration and repetition. He tamed the temper of woe in himself, allowing for his competence to flourish and expand. Such is the process of learning to infuse love into labor. The alchemy of these concepts is tenuous but when they are finally brought together, they [imbue] the worker with the ability to engage which is a sacred skill. Service is work combined with love. Fusing them must be the primary […]my employ. A lifetime […] someday yield…

Of course, woe is not the only temper that we must all tame. Mr. Willit was, I firmly believe, a victim of an inflamed sense of malice, the most noxious and corrosive of the tempers. In one event, I recall him grinning as he reached for the chiffarobe leg, and while this expression is most commonly an expression of frolic, here it must be taken as proof positive that the pain Mr. Willit inflicted aroused in him a grim pleasure, the explanation for which can only be malice. As with any of the four tempers, the problem is not the existence of the quality in the man, but the rampant growth and expansion which results from allowing it to exist untamed. In the man with too much frolic, this may lead to unhealthy lifestyle motions, such as becoming an actor or a flautist, or the adoption of an irresponsible hairstyle. Excessive dread may lead a man to remain in his house mewling over imagined threats, or to kill his wife out of a crushing terror that she will do the same to him. Woe may lead that same man to dress all in black and mope about his town, moving as a shadow across the sunnier lives of his friends and colleagues.

But a man who has tamed his tempers, who has brought them into balance with each other, finds on the other side of the struggle a holy sense of quiet. This quiet could be called peace, but I see as love. This love, truer than any other, is the promised result of your service to me. It is what I can give to you, or rather what you can attain yourself through a life of service to me. The delivery of this love is why I employ[…]originated the company for which […] perhaps why the lord of the[…] me out of matter and…upon this world…can be del…acknowledge..

One man who did not appreciate Dell’s unique gifts was Mr. Edgare Willit, who abhorred the injured above all else. He refused to believe that any amputee could be of use in a business setting and swore to the lord daily that any who he discovered in his employ would be sent to the children’s prison. While most cities at the time had their own children’s prison, ours was notoriously cruel, and Dell wished to avoid an interment there at all costs. It thus became the responsibility of myself and his other friends to construct Dell a convincing false hand, to be worn at all times when Mr. Willit was present. It was my idea to use the skin of a chicken, stretched over wooden sticks from the forest, to achieve this illusion. This proved effective, and Dell worked gainfully at the emporium for many months before being discovered by Mr. Willit and sent to the children’s prison. It was at this point that I lost contact with my bosom friend, and I do not know for how many more years he lived.

Alas what moral can be derived from such tales? For me, it was that a man of the temperament of Mr. Edgare Willit has scarce ability to access his workforce’s most powerful asset: their love. Toil, as we all know, can be wearisome. A worker may suffer injurious pain of ghastly dehumanization, and no workspace is without its perils. But whatever your task, dear worker, see that you perform it with love.

Endow in each swing of your axe or swoe of your pen the sum of your affections, that through me they may be purified and returned. No higher purpose may be found than this. Nor any higher love.

This, after all, is the ultimate recompense for your labor. No monetary wage that I may give you can surmount the benefit of the pure love which can only exist between a worker and his employer. It is the only kind of truly selfless love…

Excerpts from 16-5-C-11 Labor, Goodliness, and Love - Heart of the Workforce